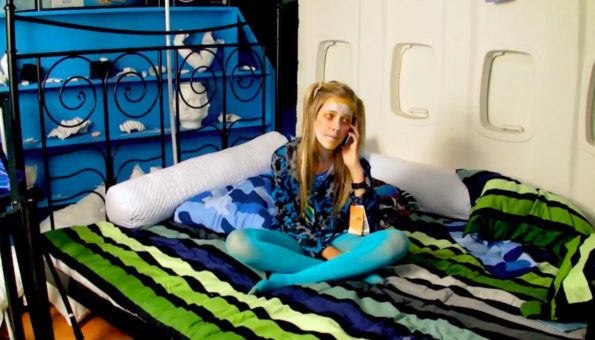 In this edition of 2022, under the title Teen R-evolution: between meme and drama, we present a series of artistic and cultural proposals that revolve around adolescence as a time of transition, change, construction of identity, personality and position in relation to the world, and that highlight the conflict that we live day by day and that digitalization only exacerbates.

With Teen R-evolution we want to insist on the need to empathize and to put ourselves back in the shoes of our adolescent self. That transition between childhood and adulthood, that stage so irrational and intense, at the same time vulnerable and malleable, where the first disappointments are lived, the first sexual experiences, in short, a time of experimentation and metamorphosis. This is a period we have all gone through that is so complex and uncertain, in which it is easy for us to place ourselves and empathize, perhaps more than putting ourselves in the shoes of a person from another cultural reality, race or gender. In other words, it is about adolescence as a universal and global paradigm.

The need to understand the world in order to define a point of reference is related to adolescence, but also to all of us, especially today. Therefore, it is about paralleling the complexity and uncertainty of the moment we live in with that of adolescence.

Quién lo impide is a call to transform the perception we have of adolescence and youth; that of those who were born at the beginning of the 21st century and have just come of age; those who now seem guilty of everything while seeing their hopes diminished. Between documentary, fiction and pure testimonial record, young teenagers are shown as they are but as we rarely see them or let us see them: taking advantage of the film camera to show the best of themselves and restore our confidence in the future. Because the youth who talk to us about love, friendship, politics or education are not only talking about their own, but about what matters to us always, at any age. Quién lo impide is a film about us: about what we were, what we are and what we will continue to be. The work of listening, relaxation and how to understand the passage of time without going through analog or digital devices leads to the action Parar el tiempo at the high school for two hours. This project is the result of the program En Residència. The final action required the involvement of all ESO and high school students who agreed to get rid of their mobile devices; but also the participation of the teaching and management team. It also counted on the involvement of the maintenance manager, who was in charge of deactivating the school bells. The video conveys the enthusiasm involved in initiating the action and conveys the prize of the final calm that the students were able to enjoy after managing to “stop time”. Group-Think (2020-) is a hybrid sports/educational programme that seeks to expand the current formal educational programme at schools by implementing training techniques in nonviolent civil protest, first aid, and collective intelligence skills.The project introduces a series of exercises that simulate the movements of crowds and promote awareness of the ability to act in solidarity and collectively for global justice. Group-Think supports young people’s discussions and concerns about social and educational inequality by creating a sports platform that strives to strengthen their individual and collective political consciousness, as well as deepen the public’s understanding of what young people, collectives, and protest stakeholders need. By training students in collective intelligence, solidarity, resilience, self-care and community-care, they’ll be able to better protect each other in mass gatherings.

The Re’Search is a teen microcosm with a series of scenarios featuring young girl characters who drift in and out of the plot. On the one hand, there’s a production commissioned by Voy’s lesbian mothers – a pseudo Olsen twin with a tail. Or the show’s beautiful, tortured Sammy B, who vows to commit suicide every day by webcasting from her pink bedroom. Although her fans watch her to hate her, what they love to see her feel, that’s why the audience will never let her quit. Framed as research subjects and thus ostensibly anthropological content, the young girls in the film serve as archetypes, social structures and perfect Disney appearances. Girls played by other girls, the drama ranges from negotiations between companies and families to the exploitation of child actors by their own parents. Still from The Re’Search (2010), Ryan Trecartin and Lizzie Fitch

A series of soundscapes lead us to think of the city of the future as a modular city. An agile and flexible city for our changing times and in flux with the adolescent age. To end the event with a sonic jolt that aligns us with our teenagers. Robert Lippok is as a musician, stage designer and visual artist based in Berlin. He studied stage design at Kunsthochschule Weißensee Berlin. In 1984, he and his brother founded the experimental music project “Ornament und Verbrechen”. Lippok’s works are dedicated to the combination of spatial sound and architecture and have been exhibited at the Neue Nationalgalerie in Berlin, the Hamburger Bahnhof, and the Haus der Kunst in Munich, among others. As a composer, he has collaborated with the artists Doug Aitken, Olaf Nicolai, and Julian Charrière, with architect Arno Brandlhuber, and with choreographer Constanza Macras for various dance theater productions. Most recently, he released the solo album “Applied Autonomy” on the raster-media label. Lippok teaches at NYU Berlin and is a member of the Institut für Raumexperimente e.V., founded by Olafur Eliasson, as well as a curator at the Spatial Sound Institute in Budapest. With his audiovisual shows and live music, he has performed at the festival MUTEK, the Unsound Festival, L.E.V. Festival, Gamma Festival, Berghain and Funkhaus Berlin, among others.

Teen R-evolution: between meme and drama involves questioning the global social and cultural changes that have taken place in the last 30 years. Years in which the way of seeing the world through a screen and through access to large amounts of unfiltered information, conditions the development of adolescents. Adolescence as a concept entails a break with the past, but without losing the idea of continuity. However, contemporary modes of transition, characterized by the notion of change, variability and immediacy, collide with the idea of “linear trajectory”. This approach is intended to evolve in order to open the way to new life itineraries – or transit to adulthood – that admit multiple lines of action, diversified, speculative and cumulative trajectories, and above all that do not necessarily have a single, uniform and not even known end.