Videoart at Midnight BCN, a project by A*Desk 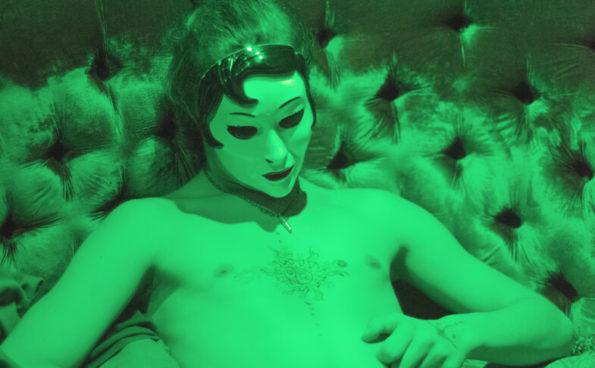 Videoart at Midnight BCN is a project by A*DESK in collaboration with Videoart at Midnight Berlin that will have its grand premiere next Friday September 17th at 23h at the Zumzeig cooperative cinema, presenting the exceptional films by Omer Fast and Tobias Zielony curated by VAM Berlin and Momu & No Es on the VAM Bcn side.

A*DESK’s will to experiment and renew formats from which to carry out dissemination on contemporary culture leads us to Videoart at Midnight BCN, taking the background, traction and successful formula of Videoarte at Midnight Berlin, a project founded by Olaf Stüber and Ivo Wessel in 2008 —since then directed by Stüber.

Videoart at Midnight (hereinafter VAM) aims to bring video art to the public for free at a time when the cinema has already finished its programming (midnight) in order to provide a distinctive sensory and cognitive experience, in a dedicated and dark room, and large format screen thus being able to focus all the attention on the work.

VAM introduces expanded cinema and the possibility of visualizing works that in exhibitions are normally presented on screens or TV monitors in the open, along with many other art pieces reducing —most of the tim—- the time of attention to a couple of minutes with unfavorable sound and light conditions.

VAM as a cinematographic experience. Cinema requires 100% of our attention. In a dark room dedicated to these works, we close our minds during that time to surrender to the spectacle of the seventh art. Cinema seduces us into “enduring” artists’ moving-images, and encourage us to challenge our individual cinematic experiences. Only then, it becomes possible to trigger a discussion that reflects the artwork.

The artists are present. It is their night. VAM Bcn introduces the film makers to the public to present their work and motivations live. This is a unique opportunity to meet the artists and get closer to their thinking and principles in first person.

VAM always takes place on Fridays at midnight. Midnight is a special time. There are not many other cultural activities at that time in the city, therefore if someone comes to the event, they really want to see what is on show. The public that will attend VAM will come with a certain predisposition and therefore the reception is assured.

The aim of VAM Bcn is to activate and revive the cinema space as a place for meeting and exchange, something that is disappearing with the new paradigms brought about by digitalization and streaming platforms. With VAM, a new meaning is given to traditional movie theaters, using the cinema after its last session, that is, at midnight.

VAM wants to establish a link between Barcelona and Berlin. A north-south link and vice versa between the Mediterranean and the German capital to give an insight into the current video art production of Berlin’s unique international art scene and offer artists working with film and video a platform of their own.

The function of VAM Bcn is to bring video art closer to people who are not familiar with this discipline and to present international video artists based in Berlin together with national artists in Barcelona through Zumzeig, an audiovisual diffusion platform open to other cultural activities such as VAM Bcn.

For the grand opening of the future series of events, and under the title Recurring Incidents, VAM Bcn and VAM Berlin have selected the following artists (in alphabetical order): Omer Fast, 5000 Feet is the Best, faux documentary and complex reality; Momu & No Es, Global Windshield, the musical and three films by Tobias Zielony: Hurd’s Bank, Maskirovka and Le Vele di Sampia.

5000 Feet is the Best is based on conversations with an American drone operator recorded in a Las Vegas hotel. On camera, the operator talks about the technical aspects of his work and his daily routine. Off camera, he briefly describes incidents in which the drone shot both military and civilians. The film repeatedly shifts from documentary to fiction, interweaving the operator’s story with scenes depicting other crimes in and around Las Vegas, taking the viewer on a meandering journey through Las Vegas.

Much of Omer Fast‘s work delves into the psychology of contemporary trauma, often relying on the blurring of memory and the narration of real events through cinematic convention. His work goes beyond the formalities of narrative, traversing reality and non-reality. And he addresses the status of the image as a tool for disseminating information, both real and fabricated, and how stories change when told from different perspectives. Many of his recent works examine the shifting boundaries of modern conflict through the personal stories of those involved.

Global Windshield, The Musical by Momu & No Es (they live and work between The Netherlands and Spain)

Global Windshield, The Musical replicates the state of hypnosis produced by the prolonged driving in a highly predictable environment in order to rethink, propose and imagine preferable futures. A trip in a scenario in completely disconnection with nature that investigates from the most human the sensation of loss of control, failure and impotence. The songs in the video explore how we ignore the signs that manifest around us to live in a world anesthetized by the promises and hopes that technologies offer us.

The work of Momu & No Es (Lucía Moreno, Basel, 1982 and Eva Noguera, Barcelona, 1979) is based on an exercise of resignification of the everyday and on the fantastic combination between reality and fiction. A work that proposes a system of delirious unfolding (apparently naïve but subversive in depth) that feeds on the literary to generate possible stories that seem to have been hidden or forgotten in the intricacies of reality. They question social roles, the use of technology in the present, the theory of affection, failure or the failed promises of happiness. They develop plots, events and fables with references in popular culture, and their projects combine video, performance and installation.

Hurd’s Bank deals with oil smuggling off the Maltese coast, the murder of journalist Daphne Caruana Galizia and the question of what we can and cannot be seen. Maskirovka focuses on the underground queer and techno scene in Kiev after the 2013 revolution. The term “maskirovka” describes a tradition of Russian war tactics of deception. Recent political events, as well as Russian interference in the country’s internal affairs, are seen as a sad parody in which everything is possible but nothing seems to be real. Life, at all levels, is doomed to a situation where there is no right or wrong.

Le Vele di Scampia is a stop motion video that portrays the great modern urban housing project built between 1962 and 1975 in the neighborhood of Scampia (Naples). The name Vele di Scampia (in English Scampia’s sails) comes from the huge triangular-shaped concrete buildings, reminiscent of a ship’s sail. Scampia is plagued by unemployment, has a very high crime rate and therefore easy pasture for the syndicate of crime, the Camorra. Tobias Zielony is known for his photographic representation of youth minorities in suburban areas. Among the themes and social realities he investigates, are structural change, migration and drug abuse, as well as sex work. His personal portraits have an informal character, sensitive to the protagonist visual language, gestures and poses. His critical approach to documentary filmmaking —both in his photographic work and in his videos and animated films— is manifested in his recognizable aesthetics and relationship to fiction.