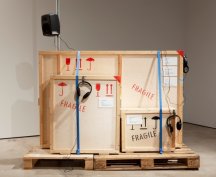 What comes after representation? And how can curating be understood as a way of being active, as a practice that enables processes of collaborative knowledge production with an unexpected outcome? Following James Clifford and Mary Louise Pratt, exhibitions can be understood as shared social spaces where different agents come together and act. This concept of the contact zone is based on contingency and processuality: It is a space of negotiation in which the meaning of words and things is not fixed but always open to discussion. Representation is replaced by process: Rather than dealing with objective values and valuable objects curating entails agency, unexpected encounters, and discursive examinations. However, in collaborative discussions asymmetric relations between participants have to be taken into account. This also may involve conflict as Clifford speaks of the contact zone as a conflict zone. And Oliver Marchart, who understands curating as the organic intellectual task of organizing, defines the curatorial function as “the organization of conflict” taking into account that antagonism cannot be organized. Hence the curatorial function consists in taking a position that transcends the mere logic of the institution. In this workshop we will retrace the idea of the post-representational as an intervention into the very classical curatorial tasks of collecting, showing, researching and mediating. This implies a revision of the role of history and research, of organizing, creating a public and education. We will do this from three agency-oriented perspectives: Actualizing the Archive, Reappropriating Space and Radicalizing Education as Unruly Knowledge Production.
Nora Sternfeld is an art educator and curator, professor for curating and mediating art at the Aalto University in Helsinki and co-director of ecm — educating/curating/managing — Master Program in exhibition theory and practice at the University of Applied Arts Vienna. Moreover she is part of trafo. K, Office for Art Education and Critical Knowledge Production based in Vienna. She has has been teaching at the Humboldt University in Berlin, the Academy of Fine Arts Vienna, the Zurich University of the Arts, the Art Academy Kassel, the Vienna Art School and the University of Education in Vienna. She publishes on contemporary art, exhibition theory, education, politics of history and anti-racism. Curatorial Projects have been: Taking Time, Gallery Augusta, Suomenlinna, Helsinki 2013 (w/Teemu Mäki), Contradictions! Critical Agency and the Difference Within, Open Space Vienna 2011; Nothing for us. Everything for everyone. Strategic Universalism and Political Drawing, IG Bildende Kunst, Vienna 2007 (w/Toledo i Dertschei); Let it be known! Counter Histories of the African Diaspora in Austria, Main Public Library, Vienna 2007 (w/Araba Evelyn Johnston-Arthur); Summit Non Aligned Initiatives in Education Culture, Berlin 2007(w/Kodwo Eshun, Susanne Lang, Nicolas Siepen, Irit Rogoff, Florian Schneider) and Hidden Hi/stories. Remapping Mozart, a project for Wiener Mozartjahr 2006 (w/Ljubomir Bratic, Araba Evelyn Johnston- Arthur, Lisl Ponger, Luisa Ziaja).

Exhibitions as Contact Zones is a workshop organised in collaboration with the Fundació Joan Miró. It is framed within the context of the 2013-2014 edition of the A*DESK Study Programme in Contemporary Art, titled Zombies, Frankenstein and the Pink Panther, coordinated by Oriol Fontdevila and the project Lesson 0, created and designed by Azotea (Juan Canela and Ane Aguirre) for Espai 13 of the Fundació Joan Miró (2014-2015).

For more information, to reserve a place or to enrol, write to contact@a-desk.org , or you can enroll on this formformulario