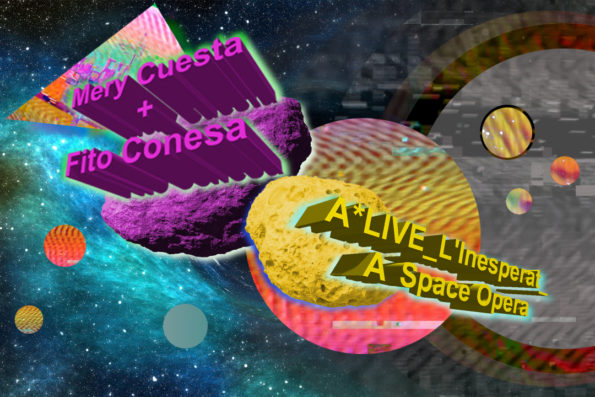 A*LIVE_L’Inesperat_A Space Opera is a project by A*DESK with the collaboration of Fito Conesa & Mery Cuesta and the complicity and support of the Center of Contemporary Culture of Barcelona (CCCB).

This is the seventh edition of A*LIVE, the public program of A*DESK that consists of a debate, with a streaming television format. On this occasion, it is an expanded and performative digital format with Fito Conesa and Mery Cuesta as masters of ceremony and catalysts for a series of collaborations (audiovisual and textual) that revolve around the notion of the unexpected.

Thus, for this occasion we have invited people that we consider to be references to react through a video or audio piece, a text or some instructions to what the idea of “unexpected” suggests to them. This list of reference collaborators includes Pilar Cruz, Paco Chanivet, Anna Dot, El Palomar, Pere Faura, Carolina Jiménez, Momu & No Es, Carlos Saez, Lorenzo Sandoval and Ian Waelder.

Inserting itself into the tradition of space operas – narratives that tell of journeys in space and in which the emotional and the technological play an important role – the tandem Conesa-Cuesta intertwines the contributions of collaborating artists on a subtext that connects television broadcasting as it was conceived in the 90s with the digital dissemination of content today.

A*LIVE_L’Inesperat_A Space Opera is inspired by the pioneering broadcasting work of Nam June Paik (taking its name from the Korean artist’s 1969 experimental broadcast on Boston Public Television entitled “Electronic Opera”), and by MTV’s grandiloquent attempts in the 1980s and 1990s to achieve global and simultaneous communications across the planet. On stage, Cuesta and Conesa inoculate these ideas into a communication paradigm such as the current one, in which real-time interaction with the viewer on the other side of the screen and post-production effects implemented live are fundamental to building a contemporary aesthetic of live audiovisuals.

A*LIVE_L’inesperat_A Space Opera took place at the Sala Teatre of the CCCB on December 11th at 6pm and could be followed by streaming. The complete video can be watched below:

Infinitely thanks to the Center of Contemporary Culture of Barcelona (CCCB) for making this possible; to Fito Conesa and Mery Cuesta for their talent and generosity, and to Pilar Cruz, Paco Chanivet, Anna Dot, El Palomar, Pere Faura, Carolina Jiménez, Momu & No Es, Carlos Saez, Lorenzo Sandoval and Ian Waelder for joining us in this adventure. And, last but not least, thanks a lot to Siddaharth Gantam Singh for the wonderful program header.